Flipping the Script with Kasper Häggström

We talked to the director about the hectic process of making his new Kelly Lee Owens promo starring Michael Sheen. 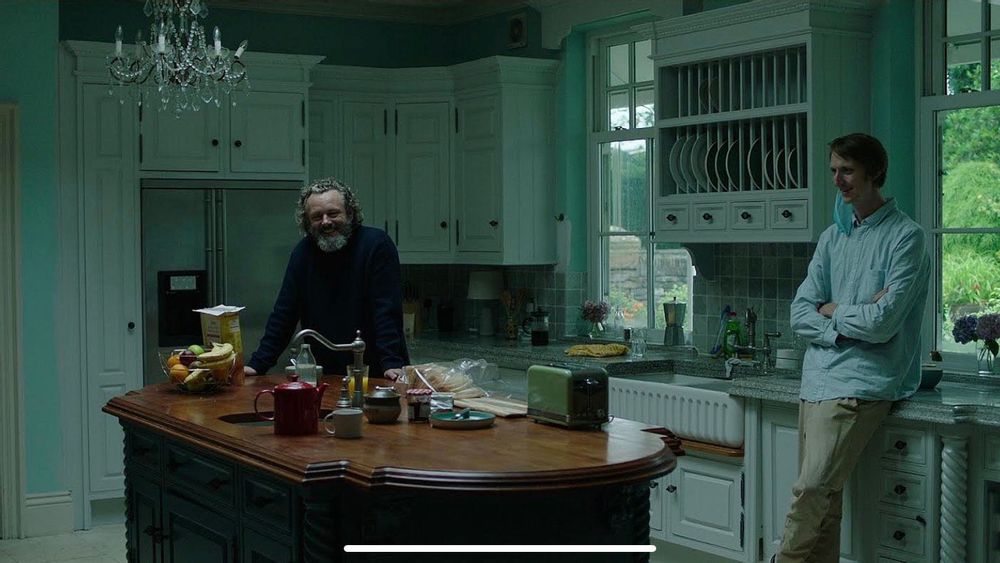 A couple of days before he had to shoot the video for Kelly Lee Owens' "Corner of My Sky" featuring John Cale, Norwegian director Kasper Häggström felt the need to toss the script that had been green-lit. Everything was set up and ready to go; The location in Wales, the film crew, Kelly Lee Owens, Michael Sheen as the lead, but now Kasper chose to write a new script from scratch and try to get everyone to sign off on it before the day of the shoot.

Sometimes that kind of gamble pays off. Other times it goes horribly wrong.

In our humble opinion, it paid off.

You can watch it here to decide what you think. And keep scrolling for a chat with Kasper about the making of the video, disappearing toast, and how he feels about being categorized as a music video director.

Hey Kasper, what is the background for your collaboration with Kelly Lee Owens?
Six years ago, I made a short film called Perry, where I used music by the Norwegian composer André Braaten. He was on the label Small Town Supersound, and the guy who had the label really liked the film. Before Kelly's debut album came out, he asked me if I wanted to do a video for one of the songs.

I made a video for "Throwing Lines" and I got picked up by Object & Animal and Bacon less than a year after that. Object also sent it to UK Music Video Awards where it won in some obscure category. No, jokes aside, it was very well received, and it was a good introduction for both Kelly as an artist and me as a director.

This time around, Kelly's team sent me the new album and asked me to do a video for the single "On". I also really liked "Corner of My Sky" and of course John Cale, so I asked if I could do the video for that as well if I made the video for "On" with the lowest possible budget.

I got the go-ahead and began to write ideas simultaneously. At first, I was supposed to do "Corner of My Sky" in Oslo but then I talked to Kelly about meeting up in Wales and wanting to do something there. Then Kelly asked Michael Sheen to be a part of the video and he said yes!

"If we did my original script, everybody on Iceland would think that we stole the idea. "

How did you pitch the video to start out with?
I had an idea of him burying himself in his backyard in an isolated house in mid-Wales. It sounded very dark, but it had a weird, quirky undertone.

Actually, everything was ready to go, and we had the house for the location, but then I found a short film from Iceland from 2004, The Last Farm. It was nominated for an Oscar, and it is basically about a guy who lives on a farm and buries himself in the backyard. Which means that if we did my original script, everybody on Iceland would think that we stole the idea. .

On top of that, Michael Sheen told me he had injured his right arm, so he couldn’t do any digging or heavy lifting, which really settled it. But at this point we were five days from shooting. Now without a script.

That sounds like a crazy stressful situation…
The project had really turned into the thing I feared the most. We had spent almost a month on the first idea, but key elements were constantly stripped, until we were about to make a performance video with Michael Sheen in it for some reason. And not in a fun way.

So, I decided to treat the whole thing as if it was a clean brief. "We have this house, we have Michael Sheen, and I guess I will start with a scene in the kitchen. He should add toast to a toaster, that is a good way to start the song…"

The next morning, I called the producer Daphne and told her what we needed to do. She really liked it, but now we had to call everyone and convince them that this was better. The whole Sunday I was just stressing out, because everybody had to sign off on it. Luckily, it worked out.

Did anybody ask what the missing toast was a metaphor for?
No, nobody asked. But I also don't think it would make sense to explain it in the end. Music videos should have a beginning, an exaggerated middle and then an open end, I think.

I don't really have a good explanation. It's just a portal toast, it's not a great mystery. The biggest mystery is how we got Michael Sheen to be in the film, I think. The answer is that he started following Kelly on Twitter and that she just wrote and asked him.

How did you prepare to work with an actor like Michael Sheen, who has won awards for films like The Queen and Frost/Nixon, worked with directors like Woody Allen and generally seems to be in super high esteem internationally?
I initially wrote a two-page character brief, but right before I sent it, I stripped it down to six sentences. In the end, it seemed like he mostly needed it to know what clothes to wear.

I noticed pretty quickly that he was very calm and humble with every note I would give him. He was such a big asset to the set, also off camera.

I was especially impressed with where he would place himself depending on the camera's placement. It felt like the first time you work with a good cinematographer who brings so much more to the story than you can imagine. I am used to doing a lot of physical directing, but here I just talked to him in the morning, and from there I only gave him ultrashort directions and notes on what scene we were shooting.

Very glad to hear that. What are the next projects for you?
I would like to do one more music video this year, and I might write some short format stuff. But I am yet to make a single dollar on music videos, so I am also going to keep doing commercials.

It is always an absurd struggle to make things work with music videos, so for every single one I have to ask myself if this is something I want to spend this much energy on. But I really like the format of music videos as a platform to be creative. If you have a great song, it's really fun.

In the end, I'd just like to make films that are reflective of our culture at this point in time – something that will be fun for my kids to watch when they grow up. I don't mind being categorized as a music video director, but I can't live off that.